A Wee Bird Was Watching

A Wee Bird Was Watching

'A marvellous version of the the folk tale of how the Robin got its red breast, the product of an inspired collaboration between acclaimed musician Karine Polwart and Kate Leiper, brilliant illustrator of all things wild' – Vicky Allan, Herald

'A thoughtful and joyful imagination of how the robin could have got his red breast. This picture book’s lyrical language is as beautiful as its magical illustrations – a wintry story with modern resonance that will bring a glow to bedtime on the coldest nights' – West Coast Review

'A traditional folktale . . . and at another level, a book that has real resonance in the modern era. You don’t have to look far to realise there are man, many people in [the mother and daughter’s] poition in the world we live in today. Both [words and pictures] are outstanding. The storytelling is economical and highly effective; the illustrations add depth to the story. A great wee book!' – Undiscovered Scotland

A young girl and her mother settle in the woods for a night’s sleep, after a long and tiring journey. But who will keep them safe from harm? A wee bird is watching from the trees. And he knows just what to do. A vividly illustrated telling of a folk tale that speaks to themes of displacement, migration and protection.

Karine Polwart is a multi-award-winning Scottish songwriter and musician, as well as a theatre maker, storyteller, spoken word performer and essayist. She is a five-time winner at the Radio 2 Folk Awards, and her album Wind Resistance won the Best Music and Sound Award at the CATS 2017. She was also shortlisted for Best Actor ‘Scottish Oscar’ in the Sunday Herald Culture Awards.

Kate Leiper is an artist and illustrator who regularly exhibits and undertakes commissions throughout the UK. She is particularly drawn to mythical and animal subjects and has previously worked on Illustrated Treasury of Scottish Folk and Fairy Tales and An Illustrated Treasury of Scottish Mythical Creatures (both published by Floris). She also illustrated the Book of the Howlat (text by James Robertson), published by Birlinn in 2016. 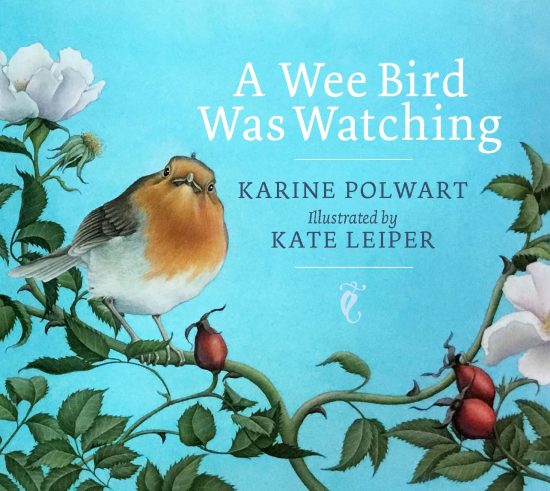